Copper & Kings American Brandy Co. hosted a first-of-its-kind event called Bookstock on December 6 and 7 in Louisville, Kentucky. The event brought together many of the world’s greatest spirit and cocktail writers for a weekend of spirited, in-depth conversations about the history, present and future of the spirits industry, right in the heart of Kentucky Bourbon country.

Bookstock centered on a series of discussions between a pair of spirits writers on a particular subject, moderated by Imbibe Editor Paul Clarke.

In the first session, legendary cocktail writer Robert Simonson and Wine Enthusiast spirits editor Kara Newman had an in-depth and occasionally contentious conversation about “The State of the Cocktail Today.” Subjects included the increasing ubiquity of well-made classic cocktails; the spread of cocktail culture beyond big cities into suburbs, small towns and rural areas; the rise of non-alcoholic cocktails (“mocktails”) and whether spirits writers should be covering them (a contentious subject); and where cocktail culture goes from here — an enduring subject of conversation across both nights of the event.

Next, Fred Minnick and Davin de Kergommeaux — possibly the most well-known Bourbon and Canadian whiskey specialists — held a jocular sparring match that left the audience in stitches. They discussed the nuanced differences between Canadian and American whiskey, why Bourbon has become incredibly popular again, why the best Canadian whiskey rarely comes to the United States and whether Canadian whiskey is more defined by where it’s made or by who made it.

Friday night concluded with cocktail historians David Wondrich and Wayne Curtis discussing their work in reviving historic cocktails, what secrets are left to undercover for a researcher who is intrepid enough, and what information may simply be lost to time.

Saturday began with a book fair, followed by two more sessions. Drinks editor Noah Rothbaum and Jim Meehan, founder of the iconic New York cocktail bar PDT, came together cordially on a  list of the ten most important cocktail and spirits books of all time (so far!). They had a surprising amount of overlap, from Jerry Thomas’s How To Mix Drinks (1862), which Meehan says “codified that bartending is a craft,” to The Savoy Cocktail Book (1930) and (to much applause) Imbibe, by Dave Wondrich, who was in the audience.

Lastly, cocktail writers Amanda Schuster and Phillip Greene discussed how cocktails can evoke a certain sense of time and place, and how the cocktail scene in a city can reflect so much about its broader culture at a certain snapshot in time. Schuster discussed the significance of mixology to New York City in the first decade of the 2000s, and Greene explained the drinking culture of Hemingway’s Paris.

In between the sessions, cocktail writers mixed freely with audience members over a variety of Copper & Kings brandy and gin cocktails. Representatives from a large number of distilleries from Kentucky and beyond attended the event, including managers or owners from Heaven Hill, Kentucky Peerless, New Riff, and even Colorado’s Distillery 291.

It’s rare for so many great spirits writers to come together in one place, and rarer still for them to get a chance to speak about their own work rather than the many other subjects they cover. Many of the participants expressed hope that this year’s Bookstock would be the first of many, and we here at ADI hope that as well. 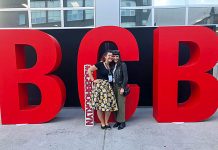