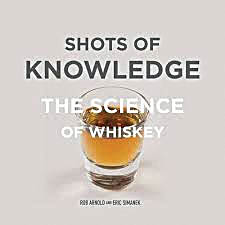 Shots of Knowledge: The Science of Whiskey

Rob Arnold and Eric Simanek are the authors of Shots of Knowledge: The Science of Whiskey. Arnold was born in Louisville and is the third generation of his family to be in the whiskey business. He is the head distiller at Firestone & Robertson Distilling Company and a Ph.D. candidate in plant breeding at Texas A&M University. Simanek is the Robert E. Welch Professor of Chemistry, Chair of the Department of Chemistry and Biochemistry at Texas Christian University and the director of the TCU IdeaFactory. Arnold and Simanek divided 58 essays on the science of whiskey into three parts: “From Sunshine to Sugar” describes how water, light and CO2 combine to form the essential structures of various cereal grains. Part 2, “From Wee Beasties to White Dogs,” covers the science of yeast, mashing, fermentation and distillation. And lastly, “From Barrel to Brain” follows the whiskey through maturation to ingestion.

Shots of Knowledge is an excellent coffee-table book for your home or a distillery tasting room. Each of the 58 essays is one page with an accompanying photograph or illustration. In the margins, Arnold and Simanek also include short snippets of information that build on the central theme of each essay. Both authors have significant scientific training to write authoritatively about the chemical and biological processes that convert grain, yeast and water into whiskey. While the essays are very specific about the science involved, they are short enough to not overwhelm. Shots of Knowledge makes a great coffee-table book since each essay stands alone and the illustrations are engaging. Arnold and Simanek have produced a book that will interest both consumers and distillers who want to better understand the science of whiskey. 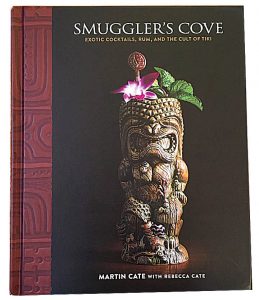 Smuggler’s Cove: Exotic Cocktails, Rum, and the Cult of Tiki

Martin Cate has long been a champion of rum, exotic cocktails and the tiki community as well as a proprietor of several award-winning drinking establishments, including Smuggler’s Cove (San Francisco), Whitechapel (San Francisco), False Idol (San Diego), Hale Pele (Portland) and Lost Lake (Chicago). Along with his wife, Rebecca, Cate has created a comprehensive guide to tiki culture; it’s history, techniques and, most of all, the drinks— Smuggler’s Cove: Exotic Cocktails, Rum, and the Cult of Tiki.

Smuggler’s Cove is a fantastic achievement and a beautiful monument to the influence of tiki, rum and exotic cocktails on American culture, and it is a fun read, told with Cate’s impish sense of humor. Part one of the book tells the engaging story of the birth, rise, decline and revival of Polynesian Pop. In part two, the Cates tell their own story of how Martin and Rebecca became captivated by tiki and built one of the country’s preeminent bars for rum and exotic cocktails. Part three describes the history of rum, how it is made and the various styles and categories that define it. For distillers who want to better understand how bartenders use different styles of rum to create exotic cocktails, this is a must-read. Part four covers the nuts and bolts of what goes into making the cocktails. And in part five, how to deck out your home and wardrobe for your newfound (or long-held) love of tiki aesthetic is covered.

Smuggler’s Cove is a wonderful book in terms of its prose, humor, completeness and graphic design. The story of the rise, fall and rebirth of tiki culture is fascinating, and numerous photos connect readers to the people and places that made Polynesian Pop and exotica nationwide phenomena. The Cates intersperse more than 100 drink recipes within the book and close each chapter with a smattering of cocktails that match the narrative. Smuggler’s Cove allows the audience to not only read the history of exotic cocktails but also to drink that history, if they choose.