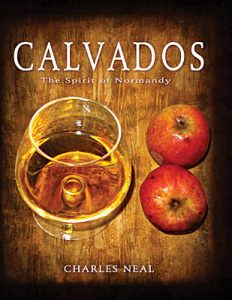 Charles Neal is the owner of Charles Neal Selections, an importer and distributor based in San Francisco, CA, and the author of Armagnac: The Definitive Guide to France’s Premier Brandy. Neal’s most recent book is Calvados: The Spirit of Normandy. During the course of his research, Neal traveled extensively throughout France and conducted over 200 interviews with calvados producers in Normandy. This experience, as well as his work writing Armagnac and running an import business, makes Neal one of the country’s top proponents of and experts on French spirits.

With more than 700 pages, Calvados is not just a thorough catalog of calvados producers, but an attempt to understand calvados by contextualizing it in the place that it comes from. Neal begins the book with a social and ecological history of Normandy, a survey of how calvados is made and how to read calvados labels and age statements. From there, Neal divides producer profiles into three major sections: agricultural producers, who are farm distillers who manage their own orchards, ferment their own cider and distill it; industrial producers, which are businesses that purchase the majority of their fruit from other growers and distill and blend the majority of their own distillate; and négociants, who purchase 100 percent of their distillate from other producers, but age, blend and bottle the calvados in-house.

For a variety of market reasons, American drinkers are beginning to show more interest in drinking brandy, whether neat or in a cocktail. Neal’s Calvados can be an instructive guide for both consumers and for U.S. distillers who are interested in learning how some of the world’s best apple brandy is made. Neal outlines a variety of techniques that craft distillers can emulate, although there are some disadvantages that will not be overcome quickly.  EZ

[Editor’s note–This review seemed timely because of recent increased interest in Apple Brandy. Though not in common circulation, the book is available directly from the publisher at: https://boardandbench.com/collections/spirits-beer-and-cocktails.] 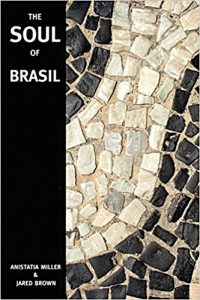 Since 1992, Anistatia Miller and Jared Brown have been writing, speaking and teaching about the history of cocktails and spirits. Together they have written more than a dozen books on Champagne, vermouth, cocktails, and spirits as well as articles for Imbibe, Wine Spectator, and the Financial Times. In 2009, Brown became the head distiller at Sipsmith in London and he has helped to develop spirits in Sweden, Norway, Vietnam and the USA.

In 2008, Miller and Brown wrote The Soul of Brasil, which is a short history of distillation, of Brazil, and the important cultural role cachaça plays in that country. While the book seems to have been sponsored by the cachaça distillery Sagatiba, it is well written, and serves as a good introduction to the world’s ninth largest spirits category. The book is broken down into two parts; part one traces the history of beverage alcohol since 7000 BC, European conquest of the New World, the creation of cachaça, its decline in popularity and its resurgence. In part two, Miller and Brown describe what makes cachaça unique, how it is made, its categories and flavors, as well as popular food and drink combinations.

Despite the fact that Brazil only exports about 1% of the 1.5 billion liters of cachaça sold each year, the story of cachaça is interesting for other small distillers. Though approximately one-third of the market is controlled by one brand, more than 30,000 cachaça distillers exist in Brazil. These local micro-distillers are able to remain relevant by fully embracing the local music, dance, food and drinks of their region. By becoming enmeshed in the community, their community has a reason to buy their spirit over the national brands.  EZ