As imbibers, we saunter up to a bar and ask for our medicine with a sagacious smirk. The bartender knows what we mean. Libations have been affectionately referred to as “medicine” for as long as they have existed. From the time of the first accidental fermentation to yesterday’s happy hour, the perception of fermented and distilled liquids has morphed considerably. With the recent resurgence of bitters and tinctures rooted in healing herbs, along with the growing number of craft distillers relying on local, seasonal and organic ingredients, a renaissance of medicinal mixology has arrived. It is time to reconnect with ancient histories of healing based in herbs and spirits, to usher in a new era of conscious imbibing. Complementing a growing awareness of which foods and environmental pollutants we routinely ingest, a movement toward quality, healing-forward cocktails is only logical.

History of Libation as Medicine

David J. Hanson, Professor Emeritus of Sociology at the State University of New York in Potsdam, offers a glimpse into our spirited beginnings through a cultural integration timeline of alcohol. “Alcohol in antiquity provided both nutrition and needed calories, a trading commodity, a medication, an analgesic, a social lubricant and played a role in religion.” Hanson begins his timeline before 10,000 BCE, with alcoholic beverages made from berries and honey. Moving through the ages, different traditions and types of fermented beverages emerged across different cultures worldwide. For example, evidence of a Chinese fermentation made of rice, honey, grapes and hawthorn berries dates back to 7000–6600 BCE: Rice as a caloric staple, honey as an antibacterial and energy booster (among many other healing properties) and grapes and hawthorn berries as heart and blood nourishers created a perfect blend for the ancients to imbibe. By 2000 BCE, alcohol was considered a spiritual food in China, used in all types of ceremonies and also for medicinal or healing benefits. Egyptians used beer as a staple as early as 4000 BCE to avoid the heavy bacterial load of the local water. Mothers in Egypt sent their children to school with plenty of bread and beer for sustenance throughout the day. Before a battle, the wives of Roman soldiers are said to have sent their warriors off with a shot of borage oil (an herb believed to possess fortitude-giving properties) and wine to ensure victory. Stories similar to these continue, ultimately involving the Greeks, Romans, Mayans, Persians, Sumerians, Mesopotamians, Babylonians… and the list goes on.

The introduction of distillation quickened the pace of alcohol’s evolution. Crude stills found in Mesopotamia were used for distillation of oils and perfume, but it was not until the Middle Ages, according to Liliane Plouvier, that the first alembic for distilling spirits emerged. Plouvier credits Persian and Arab alchemists with the earliest distillations, although noting that considerable time would pass before Western societies began to practice the magical production of alcohol. Initially, distilled alcohol was used solely as medicine and was a privilege afforded only to apothecaries and physicians. Medicinal spirits were administered as tinctures for healing, and these treatments proliferated. Alcohol came to find its place throughout many societies. In a medical book written in 1310, Maître Vital Dufour describes the benefits of aygo ardento (a forbear of Armagnac): “She cooks an egg… raw or cooked meat, she conserves… if we add herbs, she extracts their virtues… She sharpens the spirit when taken in moderation, recalls memories past, makes man joyous above all, preserves youth and slows senility… She cures sore throats if gargled frequently… and if drank, she loosens the tongue, gives audacity, if a shy person drinks from time to time…”

After the 15th century, the use of spirits spread outside the realm of medicine. Available materials in each region influenced what was produced; whiskey, brandy, gin, vodka, tequila, liqueurs and other alcohols guided the way down the path to where we find ourselves today. Thanks to this emergence, the landscape of fermentation, distillation and mixology are now rich with possibility. Innovation and creativity has sprung to new heights over the last several centuries. Specifically, the current craft-distilling movement brings us to a beautiful place of understanding and incorporating the histories, cultures and purposes of the spirits world.

According to Merriam-Webster’s, the word “medicine” has a variety of meanings, including “a substance or preparation used in treating a disease,” “something that affects well-being,” and “a substance (as a drug or potion) used to treat something other than disease,” and (in Native American tradition) “magical power or a magical right.” The dictionary also plainly describes “mixology” as “the art or skill of preparing mixed drinks.” So, “medicinal mixology” can be thought of as “the study and skillful art of mixing components into one; pertaining to a substance of natural and magical forces that affect well-being.”

As distillers, bartenders and imbibers move forward into an emerging wine, beer and spirits paradigm, the question now arises: What does medicinal mixology look like today? What botanicals should be used, and how does “healing” manifest through cocktails? The answer is as vague as the sun is bright.

Each herb, berry, seed and flower may have healing properties… if we don’t know what those properties are, it may be because we haven’t discovered them yet. There are some common herbs that are abundant and pleasing to the palate, which is a great place to start. Culinary herbs became known as such because they added flavor as well as having a purpose. In Western and Ayurvedic medicine, thyme has been used as an antibacterial, antifungal, antiseptic and decongestant herb. It can be helpful for toothaches as well as indigestion. This is only the beginning of thyme’s healing properties. Peppermint is known in the Western world as a stimulant, astringent and circulatory herb, and is reputed to help anxiety, mental lethargy, nausea and fever. Again, representing only a few of the many benefits, it is a fabulous place to start exploring how the herbs around us can benefit our health. Almost every time you open your door, the Earth has a healing surprise at your feet. I encourage using what is available from your surroundings. For instance, one of my favorite herbs is anise hyssop, which grows heartily in my garden. With a basis in both traditional Chinese medicine and Western medicines, it is an excellent herb for reported symptoms of melancholy, nausea, bloating and edema… and has a fragrance and taste that make me truly happy. For moments when I need an attitude adjustment, I create this cocktail:

Build cocktail in shaker tin. Ice. Stir. Serve up with a garnish of dried Italian sage.

I use honey for most of my sweetening as it benefits the body, unlike sugar, which can definitely harm in large amounts. It is widely recognized through the Western herbal communities that lavender is calming to the nervous system, the anise hyssop is uplifting to the spirit and the fennel and sage are outstanding digestives for most digestion issues. Combinations of herbs and spirits for healing purposes have no limit; every day the possibility of discovering new ways to imbibe in a medicinal way is growing. Books for herb reference that utilize Western, Ayurvedic and traditional Chinese knowledge are available and useful. As many individuals are becoming cognizant of each element of their health and existence, medicinal mixology offers a new way to view the world of spirits and cocktail creation.

To stimulate creativity in building a medicinal mixology styling of cocktails, let us look at three common ailments and the botanicals that can soothe. Many people are familiar with standard herbs used for the three symptomatic maladies listed below, so I chose to showcase herbs deeper in the herbal world.

People associate herbs such as fennel or anise with easing the digestive system, and both are excellent for this purpose. A slightly less-known option for stomach soothing comes in the form of a flower: For poor and sluggish digestion, the rose offers relief in a beautiful way.

Throughout many cultures worldwide, rose is thought to assist with anxiety, heartache and headache. Combining rose with lavender is said to increase the relaxation of the body and allow the digestive process to regulate itself. In the following cocktail, indigestion gets attacked from all four sides with double doses of lavender and rose.

Rinse a coupe glass with rose water. Build the cocktail in a shaking tin, except for the bitters. Dry shake the cocktail until egg white is frothy. Add ice and give it a few more shakes. Pour lovingly into the glass and add bitters. Garnish with a cut lavender stalk. Say goodbye to your sluggish digestion.

Need I say more? Distillers, bartenders and imbibers alike can all appreciate the need for a liver restorative, returning the body to optimal liver function. Used in traditional Chinese medicine and Western herbalism, this one herb not only soothes the liver, but is reputed to regenerate liver cells.  With milk thistle, an incredibly powerful herb, its seeds are the part of the plant that contains the medicine, not the prickly leaves or beautiful purple flower. Along with milk thistle for healing, the bittering herbs (gentian, hyssop, wormwood, hops, etc.) found in bitters detoxify the liver. If that wasn’t enough, lemon verbena is thought of as an immuno-booster, assisting the body to jump up and activate healing. The following recipe is designed for all those in need of a little extra liver love.

This is certainly another no-brainer. The most frequent complaint throughout the world is pain. Turmeric is highly thought of in Ayurvedic, Chinese and Western medicine protocols and is one of my favorite herbs because it is beneficial for inflammation and pain for the entire body. When pain hits, there is no time for fancy mixing and sipping. There is only time for simple combinations and a shot. The tincture in this recipe is slightly more complicated than the previous ones, but it is magic. Use 1 portion turmeric root, ⅛ portion black peppercorns, ½ portion fennel seeds, ¼ portion ajwain seeds and 1 cinnamon stick. Macerate this combination for at least six weeks in a high-proof spirit for optimal effect.

A Spoonful of Sugar

Add all ingredients to a shaker tin. Ice. Stir. Shot glass of choice. Pain be gone.

These few recipes are just the beginning of medicinal mixology. Where do we go from here?

The past has passed. There is a strong spirits presence in the present. The future is filled with opportunity for alcohol creatives to thrive. A responsibility to future generations is apparent. How do we line the path with respectful, conscious imbibing? From the ingredients that are plucked from the ground and go into the stills and barrels to the herbs, fruit and savories with which those are mixed, the gifts we provide to the world have a purpose. The spirits have their own spirit, and it is time again to honor the tradition of the sacred medicine. Oh, and the next time a bartender asks you if you would like a classic cocktail, ask if they have anything circa 7,000 BCE. 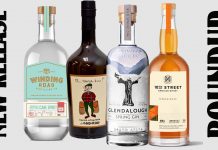