Somebody hit the switch with this Indiana Jones kinda thing and the bookshelf opened up, and behind it was a bid old vault door,” says Jay Lockwood of DorWood Distillery, laughing heartily at the drama. “But unlike Geraldo Rivera’s Al Capone safe, this thing was full!”

The home in question was built by John Baptiste Leonis, better known as J.B. His uncle Michel Leonis came to the U.S. from French Basque country, and afterwards J.B. came along at the end of the 1800s. Story has it that Michel, who would come to be known as “Don Miguel,” had a bit of an illicit upstart empire of which he wanted J.B. to take the reins as he approached the end of his life.

J.B., though, had his own aspirations, even if he shared certain tastes and characteristics with Don Miguel. He was a co-founder of the city of Vernon, south of Los Angeles, and under his stewardship it became the region’s go-to destination for revelry in the early 20th century.

“From what I’ve read, it was the Wild West Las Vegas of its time,” Lockwood says. Leonis was apparently a tireless entrepreneur, and he had his hands in everything in the town, from banking to booze, not to mention banking the fortune he made from booze. He served as a licensed liquor merchant with his company Manhattan Station, and certainly served as more than that off the books as well.

Ahead of Prohibition, Leonis had several vaults commissioned for two homes he was building, with bookcases concealing massive metal bank doors (combining his passions once again). One was in a house in Hancock Park, and the other a ranch in Little Tujunga Canyon he used as a weekend retreat. However, the hidden vaults were perhaps too effective, as Prohibition came and went but the liquor stored within was forgotten about. The spirits were left stashed and untouched for a century.

It wasn’t until 2017 that their discovery was made, upon the death of Leonis’s only grandson, Leonis C. Malburg. Malburg was appropriately the namesake of his elder, as he followed in his grandfather’s footsteps, serving as the mayor of Vernon for 35 years, while also allegedly rubbing elbows with the wrong side of the law. His term ended in scandal when he resigned the office after a conviction of conspiracy, perjury and voter fraud, stemming from the fact that he didn’t actually live in Vernon, but rather Hancock Park. Ol’ J.B. had been indicted for essentially the same thing in 1978, though the charges were dropped.

It was in the sorting out of Malburg’s estate after his death when the vaults were found and opened. As Lockwood said, there was a massive discovery within both. The collection included more than 40 cases of century old bonded whiskey: pint and quart bottles of 1914 Hermitage whiskey, 1912 Old Crow, and Biltmore Rye Maryland Straight Whisky, labeled specifically for the Los Angeles Biltmore Hotel, among them. There was also ancient Macallan whisky and cognac, and a hodgepodge assortment of other spirits, from port and sherry to Moscatel, and bottles labeled merely as “Very good whiskey 104” and “Very old whiskey 104.”

Such bottles fetch a pretty penny, as you might imagine. Christie’s auctioned a number of lots in 2018, with, for example, a lot featuring 5 quarts of Hermitage Pure Rye Whiskey, WA Gaines 1908 going for $22,050, and a string of 24-pint lots of Hermitage Whiskey Bottled in Bond 9 Years Old 1914 going for $24,500 apiece. J.B. had the foresight to stow away the pre-Prohibition bottles, but even he could hardly have envisioned what their worth would be in 100 years if his secret stash was never revealed in the interim.

That’s not all they found, though. There are surprise revelations and then there are outright mysteries. In addition to the sealed, labeled bottles, the vaults also housed a collection of unmarked carboys, or glass demijohns, filled with an assortment of spirits. There were several dozen demijohns in total, with perhaps 50 or 60 gallons of liquid combined. The precise contents of the contents may never be known at this point, though the spirits were sent off for laboratory analysis to determine what they were categorically, and to ensure they were safe for consumption.

Here’s where Lockwood comes into the picture. He’s the founder, distiller, and do-everything-it-takes-guy of DorWood Distillery, located in the Santa Ynez Valley in Buellton, California. Through a series of contacts between his brother and the company managing the Leonis estate, he eventually was in position to consult and assist with the project, including the planned bottling of the mystery vintage spirits for sale. “We don’t know who made it, when it was made, what it was made from, or anything like that,” Lockwood says.

As Lockwood began moving through the process of bringing the collection to sale, he was happily taken aback though when he learned the T.T.B. was well prepared for such occurrences. “The thing that surprised me more than anything, is that when I called up the government and said ‘hey we have all this old alcohol, we don’t know where it was made, when it was made, the mashbill, what’s in it, any of that stuff,’ and they said ‘oh no problem we have a division for that,’” he recalls. “I’m like cool!”

Assuredly cooler is that he has gotten a chance to do some taste testing along the way, too. All in the name of professional research and quality control, of course. “We’ll be in the distillery at 9 a.m. on a Sunday morning, feeling really good drinking 100 year old whiskey,” Lockwood says with another hearty laugh. “It’s a lot of fun!”

At the time of this writing, the exact plans for the hooch had not yet been determined, including the name for the spirits and where, how, and for how much, they will be sold. But the team behind the project plans on celebrating in style.

“We’re going to have a big old party for it, down in Vernon,” Lockwood says. “There’s still a bar down there that J.B. sold a lot of his stuff at.”

The bar was once known as Jack Doyle’s Center Bar, and at the time of its operation in the early 1900s it was touted as being the longest bar in the world. The bar was 100 feet in length and was helmed by a staggering 37 bartenders. Leonis owned the property where the bar was built, and he also supplied it with its booze. Fitting, then, that he’ll be supplying it once more.

Even without being able to precisely identify the spirits, there is still historical provenance attached to them. They’re very much a part of the same Leonis collection, left untouched for a century just as with the rest. Perhaps not knowing what they are even adds to the fun of the whole enterprise, a fitting find for a hidden bank vault in a suburban home.

“To me, that gives a sense of mystery to it,” Lockwood says. “That’s the story: this stuff was part of what was found there, and nobody has been in there since J.B. died or before. I want a part of that history, and that is amazing.” 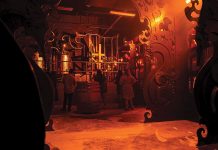 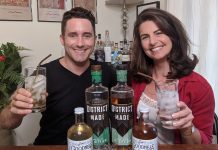 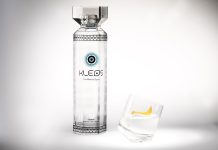