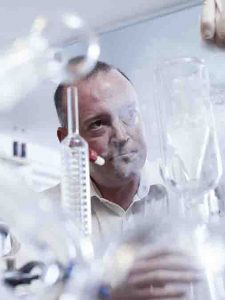 When small-batch “craft” spirits were already sweeping the US, they were virtually nonexistent in London prior to 2008. Some confusion with local laws meant few were attempting to open small distilleries in the city. That is, until pioneering Sipsmith and Sacred Spirits both launched in 2009.

Sacred founders and husband-and-wife team Ian Hart and Hilary Whitney had been experimenting with distilling in their home for years. Their journey to opening a distillery was unconventional, the epitome of a family-run, ground-up, “craft spirits” journey. Fast-forward 10 years later: 2019 marks their 10-year anniversary—and the relaunch of their Rosehip Cup (a subtly bitter aperitif). Their process utilizes vacuum distillation and organically sourced botanicals, while Sacred’s beloved vermouth has its own legion of fans.

Ian and Hilary established their original Sacred Gin recipe in 2008, featuring botanicals like cardamom, nutmeg and frankincense. Ian comments, “Given the current popularity of gin, one would be forgiven for thinking that setting up a [gin] distillery was a fairly safe bet, but 10 years ago, gin was considered rather unfashionable. I remember that before we bottled our first batch of Sacred, Hilary proudly offered a sample to a twenty-something acquaintance who, after tasting it remarked, ‘Well, it’s very delicious, but who’s going buy it? No one drinks gin anymore!’”

Sacred’s first commercial bottling in 2009 became a cult favorite, changing the face of London distilling and small-batch London gin, though they began without marketing or even an official launch. In the country where London Dry gin was born—evolving from its mother, genever—Sacred’s creative range of botanicals and styles calls on England’s birthright but with forward-thinking vision.

Here, in his own words, Ian tells us about his path to distilling, his unique distilling process and how strong industry relationships helped grow their brand.

Tell us a bit about your background:

I was born and brought up in London. In fact, apart from the time I spent at university and in the US (I studied for two years at Berkeley and worked on Wall Street for four years), I’ve lived in Highgate, north London, all my life.

I have always been very interested in science. Even when I was about 11, I often spent my spare time distilling in the room that, serendipitously, was eventually to become Sacred’s first distillery, although back then I distilled things like nitrogen oxides or chlorine oxides—unusual gases—rather than gin!

As a result of my enthusiasm for science, I studied natural sciences at Cambridge and was originally heading in the direction of a career in medicine, but being on a hospital ward didn’t suit me. Whilst I was still at university I found myself running a cellular telephone company in my spare time, just as the industry exploded. Of course, this was around the time when cellular phones were the size of bricks! We were selling 25% of all cell phones in London in 1989, but when the recession of 1990 took hold, a number of my larger trade customers went bust and, as a result, so did my company. So I went to California to study business at UC-Berkeley, after which I worked on Wall Street. Eventually, I returned to London and became a headhunter for the financial sector.

As we all know, from the end of 2006 onward, the global banking system steadily became a vast train wreck. No one was hiring in the financial sector, and I quickly had to find another way to make a living. As I said, I’ve always been interested in distillation and, as I have a large collection of Bordeaux wine, it occurred to me to use vacuum-distillation equipment to remove water from some of the less successful vintages to create a richer wine. Technically, it was a very successful exercise but it was also very time-consuming, and at the end of the day, it was someone else’s product. However, I really enjoyed the distilling process and as I’ve always appreciated a good gin and tonic, I thought I’d try my hand at creating my own gin—something a little bit different. And, as a Londoner, I also liked the idea of producing what is traditionally a London product, actually in London.

I started experimenting with various gin recipes and every Sunday night, for several months, my wife, Hilary, and I would take them to my local pub, the Wrestlers, for the locals to try. Eventually, one night there was one recipe (it was the 23rd!) that everyone unanimously declared to be “the one” and the landlord, Martin Harley, said that if I bottled it, he would have it behind his bar. That was the start of Sacred Gin.

It is called Sacred Gin, as one of the botanicals is Boswellia sacra (Hougary frankincense—hence the name, Sacred Gin), supplied by the Sultan of Oman. Frankincense has a delicate resinousness, which complements the juniper beautifully.

What spirits do you consider your flagship spirits and why?

Sacred Gin, our very first product, is definitely a flagship spirit, as it is rooted in the history of the brand and has won many awards. Sacred Pink Grapefruit Gin and Sacred Cardamom Gin are also very important as they have led, and continue to lead, the botanical gin category. They are also terrific examples of the advantages of vacuum distillation.

Tell us about your distilling process.

Possibly one of the most unusual things about Sacred was that our very first distillery was actually in our house, in the room I used to distill in as a child. Also, we don’t use traditional copper pot stills, but distill using vacuum distillation under glass. This means that air is sucked out of the glassware with a vacuum pump, which reduces the pressure so that distillation occurs at a much lower temperature (35–45°C) than pot distillation (85–95°C). I currently use five bespoke stills, which are basically a series of glass chambers connected by glass and silicone piping. They are unique, designed to my specifications, made especially for me by a glassware manufacturer. It’s a process that evolves constantly as I find better and more efficient ways of working.

There are several advantages to vacuum distillation. For a start, as the temperature of distillation is dramatically lower than the temperature of traditional pot distillation, the distillates are lusher and fresher. Think of the marmalade flavor of cooked oranges versus fresh-cut oranges. It also is also very quiet and safe, which is very advantageous when distilling in one’s home.

We macerate and distill all our botanicals—most of which are organic—separately for 4–6 weeks minimum with no air contact in the finest quality English wheat spirit. This is a seriously long time. Most distilleries macerate overnight. But we do this make sure we extract the maximum flavor from our botanicals.

As we are Soil Association-certified, we have to buy our botanicals from approved sources, so there is little scope for foraging as such, although over the years I have developed an extensive library of distillates ranging from oak bark to clay to buddleia (basically anything that catches my interest) just to satisfy my own curiosity.

How does living in London determine the style/focus of your business?

Obviously, London is the home of gin and is one of the key cocktail cities. The competition for our best cocktail bars to produce innovative finished drinks is fierce, which means that brands are almost obligated to continually up their game. I think that one of Sacred’s key strengths is that we have always had an eye for reinvigorating unfashionable categories. There were very few craft gin distilleries when we started in 2009 and now, well, now there are hundreds! There is also something of a vermouth revival, which, again, we were there, right at the start.

How have you grown your brand at bars and beyond?

Very early on we were very lucky to count Dukes Hotel bar [see the top 10 London bars article], Fortnum and Mason and Gerry’s Wines and Spirits among our customers, which gave us credibility. We have been very careful where we were listed, both on-premise and off-premise.

We don’t pay listing fees, so we are only available in places where people have an ambition to stock smaller, more eclectic brands, rather than the mainstream.

What advice would you give to fellow distillers looking to get their spirits into bars/what has worked for you?

Innovate and collaborate with the very best people in the industry. Our collaborations with Alessandro Palazzi and his team at Dukes have not only been incredibly rewarding, but they have opened all sorts of doors.

What small-batch spirits and cocktail movements are exciting you most right now?

I am very excited about the current interest in aperitifs and vermouths. Sacred Rosehip Cup is groundbreaking because it is authentic and all-natural: the color comes from rhubarb juice and grape skins, an alternative to the traditional Italian aperitivos.

I think the emerging English whiskeys are very interesting, too—our particular contribution to the category is our gold medal-winning Sacred Peated English Whisky, distilled in Norfolk, then aged in Pedro Ximenez casks, and Sacred English Whisky Liqueur, which one bartender described as an Old-Fashioned in a bottle.