Coopering was a craft integral to the American colonies, its practitioners relatively prosperous and influential due to their centrality to the burgeoning trades of gunpowder, cement, whaling, crude oil, ciders and distilled spirits — none of which could have functioned without the support of hooped barrels. By 1881, New York state records show 45 million wooden hoops were fabricated in the Hudson Valley for the purpose of holding together barrels.

In the late 1980s, John Cox began woodworking, fashioning cabinets at his family’s South Philly home machine shop. He moved to New York in 1994, developing a 13-person cabinetmaking shop expanding into studio furniture, sculpture fabrication and high-end interiors. As so many did after 9/11, he relocated upriver where he built a house in High Falls in 2003. In 2014, he learned of a shortage of barrels from friends who were looking to open a distillery and being told by cooperages of 18-month waits for barrels. He’d read in major media outlets of the craft-distilling boom “but the reality was that the coopering industry wasn’t prepared for this. And we were in the epicenter of it all with Coppersea, Tuthilltown, and Stoutridge,” Cox said. His research also showed there was no representation of cooperage online, nothing to find on the internet of how to make a barrel. He was trying to get away from the likes of lacquering booths, “and the thought of becoming a cooper was very intriguing,” he added. There began his journey of purchasing finished barrels, deconstructing them, and refashioning them for his Quercus Cooperage.

Coopering, like boatbuilding, requires distinct tools unlike those of other woodworking trades. Soon Cox bought numerous traditional coopering tools from a museum in Ottawa, Canada, that was deaccessing its holdings. Not wanting to reinvent how to fashion a barrel, he reverse engineered existing barrels to understand what tradesmen once did with the hand tools he’d acquired, teaching himself the art of coopered joinery. Everything in his small shop is rudimentary, based upon the application of hand tools he knows intimately.

The northernmost point for growing white oak is West Point, which is the northernmost of the Appalachian Mountains, so the trees are smaller, tending to be more knotted and tightly grained, and therefore more unlikely to make larger barrels. Quercus Cooperage buys locally grown white oak logs, having them milled nearby with some head stock coming from Pennsylvania. He uses only trunks without knots or branches — “veneer grade” lumber. “I’m lucky that I’m at the nexus of the craft with access to supply it with high-quality coopered oak vessels. Ninety-five percent of US mills don’t quartersaw but flat-saw, which is why in the US we have stave mills, whereas in Europe, the oak logs are split. America’s quercus alba is easier to saw.”

Coopering requires five separate processes: Staves must be air-dried and -milled, barrels must be steamed and bent, barrels must be toasted and charred, metal hoops must be rolled and canted and heads must be made and installed. Cox’s barrels are highly functional objects and cannot be made with kiln-dried lumber; rather, they must be bent from staves air-dried two to three years. Taking that into account, the first thing Cox had done was buy logs to acquire staves to age, so that by the time his R&D was completed, he was able to enter production with mature staves.

Quercus Cooperage is one of 33 existing cooperages in the US and one of a dozen or so that could be considered “craft.” Cox sells primarily to one client, Stoutridge Winery & Distillery, in nearby Marlboro, NY, with Olde York and Upstate Distilling in NY, Still Hollow in WV and Sono 1420 in CT. He sees his local competition as Adirondack Cooperage and US Barrel though “there was another on Long Island until recently; it’s a tough racket,” Cox said, He also builds washback fermenting tanks for the distilling and culinary trades, producing eight barrels weekly in his quest to eventually be a “full-range cooperage, not just a maker of whiskey barrels.”

Cox upgraded in February to a European milling machine, allowing him to elongate staves and increase production to 20 barrels weekly, and another providing greater speed in producing the heads. Both make it more accessible for him to make larger casks such as puncheons and to fashion wine barrels. All this allows him and right hand Avrom Tobin to sell Stoutridge six barrels weekly, an increase of nearly 50%. “When I worked for a luthier making guitars, there were so many variables that could go wrong; here it’s the rings, the way the staves have been milled, the way the heads sit in the croze or the manner in which they were milled. Now that I’m feeding much of this into a machine, there’s more uniformity in our staves. In the beginning, we figured out how to bend the staves but we couldn’t yet make the rings. These systems have now come together to fabricate the parts more efficiently, and the final results are tighter. No one wants a leaky barrel.” Quercus has since begun upcycling for distilleries in New York City.

Quite the regional history buff, the mix of cultural heritages Cox encountered with his Stoutridge neighbor, Steve Osborn, helped to found Quercus. Within two years he was up and running and Stoutridge was distilling rye. His support system has included Joel Elder, formerly with Tuthilltown, and recently deceased master distiller Angus MacDonald.

Opened in 2006, Stoutridge Winery’s Steve Osborn and Kimberly Wagner are Cornell- and UC-Davis-trained biochemists. “Flavors are generally illuminated by alcohol, shining an internal light into wines and spirits,” said Osborn. Stoutridge’s distilled grains, grasses and fruits are all sourced from the Hudson Valley, native to the extent of using only indigenous Vitis varieties. “I like local genomes which reflect authenticity of place,” with all products sold within ten miles of Marlboro.

Coinciding with Quercus’s development, Stoutridge’s distillery was launched in 2016 on the back of the winery’s success, with the Osborns having learned their customers’ preferences. They reached out to Angus MacDonald, who had long admired their non-interventionist winemaking methods. “If you want to express terroir, you should not only source material but also local oak for your spirits barrels,” Osborn said. With John Cox fashioning barrels from Hudson Valley oak only a few miles away, the fit was a natural, especially as Osborn gave Cox half down on 125 barrels at $330 each at over $20,000. “John’s contribution helps give us terroir to express the Hudson Valley.” Osborn wanted to use wooden fermentation tanks for malt whiskeys from their own malthouse. He posits that getting the biome of the air will impart itself into the barrel by getting lodged into the wood, thereby getting the character of the building into the mash. “To my palate, it’s working by not showing the fir character, rather an interaction with yeasts and bacteria causing more complexity in the fermentation and providing us with more aromas and flavors. This is how Scotch used to be made, in open-top fermenters, but the building of more biome interaction creates greater complexity and softer palate notes.”

They commissioned Cox to create 800-gallon fir fermenters from locally felled trees, which Cox claims creates a more complex whiskey, and uses Quercus’s 30-gallon barrels of local oak for all rye and bourbon. He’s ebullient in growing alongside his barrel maker, with the shared trials and tribulations of their progress in coopering and distilling, a shared ethos from which they’d been influenced by MacDonald, a personality revered by both men.

Current Stoutridge products using Quercus barrels are its Rye75, grown near Albany upon sandy soils — soft and easy, bottled at 43% — and West Wind, a light whiskey double distilled at over 160 proof, being half corn and half rye, aged six months in ex-Rye75 barrels and then a year in his wine barrel solera. “The lighter style is more expressive of the grain, more transparent and something wine-like.” We ended with a malted rye genever bottled as Gen, which is finished three months in Quercus’s barrels, and is, according to Osborn, “an evolutionary expression of second- and third-use barrels.”

Osborn gets his refurbished barrels cheaper from Cox than if he were to buy them from barrel brokers and have John revive them. “Why not fix broken things rather than chop forests down?” 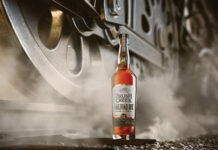 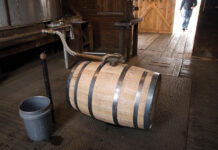