On the one hand, it’s a liquid defined by three words — colorless, odorless, flavorless — and on the other, it’s a vast spectrum of ingredients and approaches. In Eastern Europe and Russia, it is recognized by its neutrality; in the new world countries, it is recognized by its character. But the question is: Where does vodka stand in today’s world of distilling? Let us face the facts: Vodka is one of the world’s most consumed spirits and yet one of the most underappreciated ones.

During one of my visits to Scotland, I sat at the bar exploring the vodka selection while engaging in a conversation with a bartender. His response to my question of what vodka he would recommend was short and sweet: “We only have two bottles of vodka behind the bar, a standard one and a premium one.” Of course, you would not expect any other answer in the land of Scotch.

A whole different story awaited me in Moscow — the city really lives up to its vodka heritage. Vodka is consumed for general enjoyment on a daily basis, accompanied by homemade pickles, pierogi or borscht. Consequently, it is difficult to make the case for vodka. It is not a simple one, as people in different parts of the world perceive it differently.

Growing up in Slovakia, one of the countries belonging to the so-called Vodka Belt region, known for its vodka distilling tradition and heritage, vodka was the spirit vastly produced and available. For a very long time in Eastern Bloc countries, vodka was pretty much a homemade affair — crisp, flavor-packed and strong. Without a doubt, there was always an enormous difference in the quality and flavor profile within the vodka category, but in my eyes, vodka was always a noble spirit with elegant character and exceptional intensity — represented by the harmony of raw materials and water.

Here I am today, asking myself, why does vodka suffer from a misplaced lack of respect in the drinks industry? Is it because of its neutrality and simplicity? A recent article about vodka distilling stated: “Vodka is the easiest thing to make if you don’t care, but the hardest if you do,” and this statement has really stayed with me. Vodka in its traditional sense requires a lot of attention because it does not hide behind botanicals or maturation. It is the raw materials and the production method that influences the composition of the raw spirit produced. Whether you lean toward a traditional-style vodka or a contemporary-style vodka, it is necessary to control the quality and botanical origin of ingredients used in the production of vodka. Even though the analytical parameters of rectified spirit will not differentiate much according to the base, the sensory analysis will prove that not “all vodkas are the same” as commonly opined by many drinks professionals.

One of the latest movements in the world of vodka is a “theory of terroir,” borrowed from the world of fine wines, which challenges all popular vodka values and brings a new environmental approach to the table. It is believed that natural elements from the soil and unique weather patterns are translated into the actual flavor, creating vodka that reflects the influence of specific ingredients, water and the sense of place, or terroir. Embracing natural flavors can be complex and engaging and can produce strong, vibrant and delicate taste. Whichever style or production method you tend to lean toward, there is no doubt it all starts with vodka: the alpha of distilling, and that is why it deserves our respect and attention. 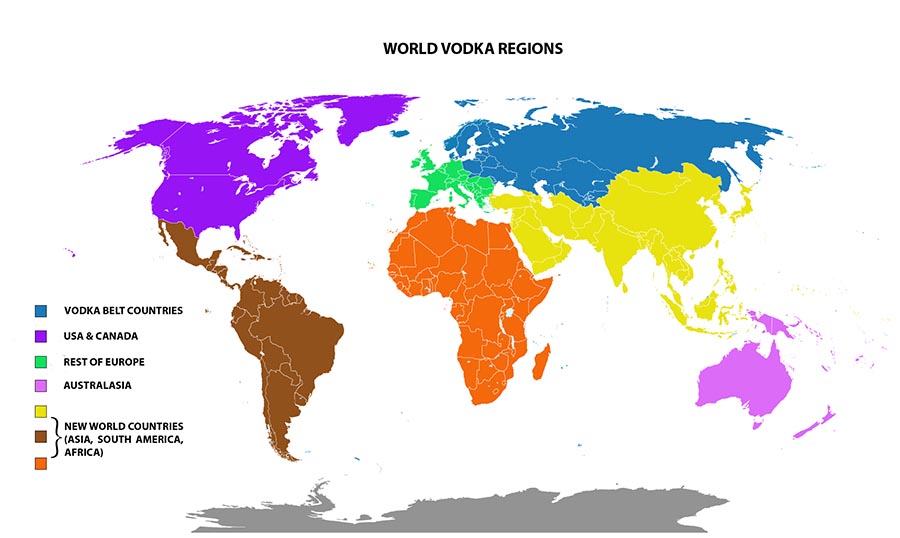