“Bottled in bond” is a phrase coined more than 100 years ago in the whiskey business to assure the purchaser that he was buying the real deal. Prior to Prohibition, counterfeit whiskey flooded the unregulated market, at best swindling people and at worst, killing them. Unscrupulous people trying to make a buck would add coloring and flavoring to moonshine, or worse, gasoline or other poisonous liquids, and sell it as whiskey. In an effort to protect both consumers and legitimate distillers, the federal government passed the Bottled in Bond Act of 1897.

This Act is often credited with being the first consumer protection act in United States history. If the following set of strict guidelines were met, the federal government placed a green stamp on bottles of barrel-aged spirits:

1. Were distilled in the same distilling season

2. Distillation occurred at a single distillery

3. Aged for a minimum of four years

5. Label must identify the distillery who made it

6. Label must identify the bottling location if
different than distiller or distillery

7. Only water could be added

That green stamp certified the authenticity of the product to which it was attached, and consumers knew what they were drinking.

Today, the term “Bottled in Bond” is still used by distillers and still guarantees its authenticity under the same general set of guidelines. But those guidelines have become mainly a marketing tool for U.S. distillers and are now codified in Title 27 CFR 5.42. Specifically, Title 27 CFR 5.42(b)(3) provides that “[t]he words ‘bond’, ‘bottled in bond’, ‘used in bond’, or phrases containing these or synonymous terms, shall not be used on any label or as part of the brand name of domestic distilled spirits unless the spirits are:

(i) Composed of the same kind of spirits produced from the same class of materials;

(v) Reduced in proof by the addition of pure water only to 100 degrees of proof;

The green government stamp has gone by the wayside, leaving the distiller to place the term on the label if desired. In fact, there is no requirement to put Bottled in Bond on the label even though a spirit may meet all of the requirements to do so, and some manufacturers purposefully do not. Despite these changes, whiskey buffs still rely on the Bottled in Bond label as a symbol of quality, especially in an age where so many products are sourced from unknown third parties.

Bottled in Bond can appear on spirits other than whiskey, as long as those spirits are aged. Interestingly, gin and vodka, if stored in a wooden container coated or lined with paraffin and stored for four years, can be labeled as Bottled in Bond. Apparently, the government did not want to provide a benefit just to aged spirits, but a marketing tool for all to use.

Although U.S. distillers primarily use the phrase for marketing, alcohol contamination remains a threat in other areas of the world. Recently publicized events in Mexico, India, Russia and China leave no doubt that the reasons for enacting the Bottled in Bond Act of 1897 remain prevalent today.

While the federal government may not be able to protect its citizens from alcohol contamination abroad, it does not allow imported products to use the words “bond,” “bonded,” “bottled in bond,” “aged in bond” or similar phrases on labels or as part of the brand name of the spirits unless the spirits meet the same guidelines required by their domestic counterparts in all respects and unless the laws of the country in which the spirits are produced authorize the bottling of distilled spirits in bond and require or specifically authorize the spirits to be so labelled [27 CFR 5.42(b)(4)]. 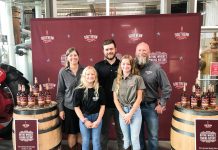