Since Tim Obert and Clint Potter founded Seven Stills in 2013 in San Francisco, they became the first and only brewery-distillery within the city’s small 7×7 miles. Seven Stills refers to the city’s seven signature hills (akin to Rome) and from day one, their business has experienced a roller coaster of success and struggle. Pandemic has been a real low, reducing their pre-pandemic staff of 74 down to three from the original team. And now with Potter recently moving on, Seven Stills continues to morph and evolve in a swiftly-changing landscape.

After their initial experimental years, they experienced everything from the opening of multiple, now-closed properties in SF (taproom, restaurants, etc.), to swiftly shifting to hand sanitizer production in the early pandemic days, to the challenges of fines and 90-day suspension from the ABC, to opening and reopening nightmares under shifting SF edicts. Needless to say, they have been through the ringer and back.

But as those of us who tasted their beers and whiskies remember from the beginning, when Obert sought to distill whiskey from different styles of craft beers, the energy and excitement of their experimentation was infectious. Even as some whiskies worked better than others, Obert and Potter’s visionary play with a wide range of beers and casks led to unique whiskies, marked by vibrant artwork. Cocktails were also an influence: I fell hard for their Negroni beer, perfectly showcasing the bitter lushness of a Negroni in beer form. But they also distill fellow craft brewers’ beers. Their Hog Island Oyster-infused Eau De Oyster whiskey is brewed from beer by Sonoma County (Petaluma) brewer HenHouse Brewing Company, a prime example of the ways in which they’ve long been willing to play.

As Obert remains at the helm, Seven Stills’ 22,500 square foot brewery-distillery on Hooper Street in SF’s Mission Bay District and their Outer Sunset Taproom near the beach are their two remaining properties. The massive Hooper St. facility opened in 2019 as their flagship with quality restaurant, cocktail-whiskey-beer bar, billiards rooms, a whiskey lounge and beer garden. Compared to past years, production has ramped way back and their products can now only be purchased locally at their facilities.

Obert and Seven Stills’ team are survivors. In his own words, Tim tells us about his journey to distilling via beer, about the future of craft distilling and about just how hard pandemic can and has hit the industry.

What led you into distilling?

Beer. I was very passionate about beer and craft brewing after graduating college and wanted to eventually start my own brewery. I loved the IPAs I drank in Southern California and enrolled in the UC Davis Master Brewers Program. However, I felt that the market was just way too saturated and wanted to find something different and unique.

The lightbulb moment came when one of my college roommates told me about how he learned that whiskeys were distilled from low quality beers. We decided that night to try our hand at distilling the craft beers I was brewing at home. After multiple test batches of brewing and distilling IPAs, saisons, stouts, porters and [other] beers that our brewery friends would let us grab a keg of to distill, we decided that the results were way too unique and way too good to not take it to the next level.

Tell us what is unique or specific about your distilling and production process.

The craft brewery connection ties into everything that we do. It has evolved into much more than just distilling craft beers. Our approach is to apply the creativity we love so much about the craft beer industry to everything we do when we’re making a spirit. This applies to the labels we design that emulate the art we love on craft beer cans.

It also applies to the off-the-wall ideas we have and our willingness to try them even if they aren’t the “norm,” like putting Hog Island Oysters into a gin basket and distilling Hen House’s Oyster Stout through it. Or swapping sour barrels with Drakes to age our whiskey made from the same sour beer we used to distill the whiskey. It’s just fun and keeps us engaged and excited about what we do.

How is your business affected by —and surviving — pandemic?

It has been very difficult. We were self-distributed and as soon as the pandemic hit our sales reps (rightfully) did not feel comfortable going out into the market to sell our products anymore. This led to our drivers not having any deliveries to make, which led to our production team not having any beer/spirits to make, which led to literally the entire company just sitting on our hands while the world figured out what was going on. As the pandemic dragged on, we saw everyone leave, either move home or take a job in a different industry that was surviving. Of the 74 staff we had pre-pandemic, we currently have three people from the original team. The fact that we’re still here and driving forward is just a testament of our sheer will and commitment to our craft.

How does running a distillery in SF proper — and the Bay Area in general — define and influence what you create?

I think it helps. In terms of food and drinks, SF is an incredibly progressive city.  This allows us to continue to experiment and take on esoteric and weird projects that are interesting to us, that probably wouldn’t do well in any other city in the world. It allows us to really have fun and play with things as we continue to develop and refine our line of core products.

What do you feel are the key elements of getting your brand placed on and off-premise? And how much has shifted or increased to online sales since pandemic?

We have actually completely stopped distributing our spirits. We are making such small quantities of our spirits that we are really only able to supply our cocktail bar and bottle shop in the Mission Bay [location/restaurant]. Unfortunately, packaged spirits isn’t a market I really see us ever trying to re-enter on a large scale. Instead, I envision us continuing to make fun and interesting small batch spirits that we can showcase at our facility and focusing more on craft beers and eventually RTD cocktails featuring these spirits to send out to the market.

How do you envision the world of small batch spirits evolving in the coming years?

I think that there will be a larger and larger divide between the hyper-local and the regional players. I envision a lot of smaller distillers being able to survive given the relaxed ABC laws due to COVID and to actually thrive in their local markets. Simultaneously, I envision a lot of the middle-tier players who did well during the pandemic being able to capitalize on the failures due to COVID by growing into larger, regional players and grabbing more market share, which will lead to more acquisitions from the big guys trying to stay relevant. It still doesn’t seem like more than a handful of brands will ever make that jump from regional to household brands, though, anytime soon. 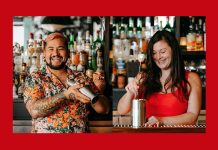 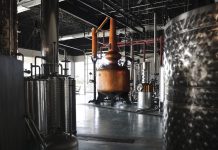 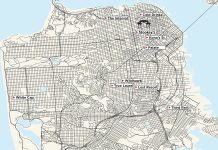