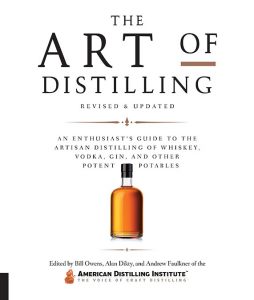 The Art Of Distilling, Revised And Expanded: An Enthusiast’s Guide to the Artisan Distilling Of Whiskey, Vodka, Gin And Other Potent Potables
by Bill Owens, Alan Dikty and Andrew Faulkner
Beverly: Quarry Books, 2019
176 pages
$24.99
ISBN: 9781631595547

Bill Owens, Alan Dikty, and Andrew Faulkner co-authored the revised second edition of The Art of Distilling: An Enthusiast’s Guide to the Artisan Distilling of Whiskey, Vodka, Gin and Other Potent Potables. Owens is a photographer, brewer and founder of the American Distilling Institute (ADI). Alan Dikty is also the author of Buying Guide to Spirits and manages Allied Beverage Tanks which builds craft breweries and distilleries. Andrew Faulkner is a photographer and worked at ADI for 14 years in several roles, including judging director and Editor-in-Chief of Distiller.

Owens et al. divided The Art of Distilling into 10 chapters: two on the history of distilling and modern distilling techniques, seven chapters explaining the major spirit classes, and then closing with some additional resources for the reader. In this edition, rum, agave spirits and liqueurs each get their own chapter, with more details about how they are made and the craft distillers who are making some of the best examples in the country. In addition, the chapter on distilling resources received an update to include more recent books on the history and production of various spirits.

Overall, the book is a good introduction to the process of distilling and the 10 years of growth in craft distilling since the first edition. Given that both Owens and Faulkner began their careers as photographers, it is no surprise that the book is filled with photos of craft distilleries and spirits from around the world. While the book is largely geared toward consumers and novice drinkers interested to learning more, The Art of Distilling will also be a fun read for those in craft distilling who have witnessed the industry grow tenfold in the past decade. 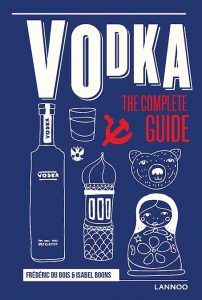 Frédéric Du Bois and Isabel Boons are co-authors of Vodka: The Complete Guide, the newest guidebook from Lannoo, a Belgium based publisher. Vodka is the second spirits book from Du Bois and Boons, who previously wrote Gin & Tonic: The Complete Guide for the Perfect Mix. Du Bois is a “spirits connoisseur” and owner of Miraflor, a Belgium-based spirits importer and distributor, while Boons is an author and freelance food and drinks writer also based in Belgium.

Overall, Vodka is a straightforward primer on the spirit with chapters on its history, production, regional styles and brands as well as how to best enjoy it neat, in cocktails and with food. Given that most of vodka’s history takes place in Europe, this section will be of greatest interest to US readers. In addition, the description of regional variation in vodka and how Russians have traditionally consumed the spirit with food has good utility.

In the past decade, the US-based craft cocktail scene moved away from vodka toward classic cocktails that called for whiskey and gin. In the mid-nineties and early 2000s, vodka earned a bad rap from aficionados for its perceived lack of substance, limitless flavored variations and the fruity and sweet “-tini” cocktails of the time. However, vodka is having somewhat of a resurgence and this book hopes to meet that interest. While Vodka has some interesting information about its eponymous spirit, the book struggles at a few points. The translation from Danish is somewhat awkward and the description of the production process is slightly off at times. This raises the question whether the authors really understand how vodka is made or if the confusion is simply due to translation. There are also instances when it seems like the authors are merely retelling brand stories from marketing materials without any critical investigation. These issues significantly weaken the authority of the writers and leaves the reader wondering about the veracity of other portions of the book. While interest and the need for a serious book on vodka exists, this attempt misses the mark.