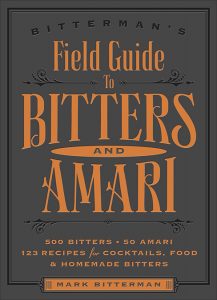 Mark Bitterman is the author of Bitterman’s Field Guide to Bitters and Amari: 500 Bitters, 50 Amari, 123 Recipes for Cocktails, Food & Homemade Bitters, and the owner of two bitters emporiums called The Meadow, in Portland, OR, and New York City. Bitterman teaches classes at the Monell Chemical Senses Center in Philadelphia and the Smithsonian Institution in Washington D.C. He has also written two other books: Salted (2010), which won a James Beard Award, and Salt Block Cooking (2013).

Bitterman’s Field Guide to Bitters and Amari is organized into six chapters. The introduction covers some of the basics of bitters, including their history. The second chapter covers the basics of how bitters are created, and Bitterman describes in good detail the bittering and flavor characteristics of more than 50 botanicals. In the second half of chapter two, Bitterman offers 13 sample recipes for homemade bitters that run the gamut from traditional to exotic. Chapters three and four include recipes for bitters-forward cocktails and recipes that incorporate bitters into cooking. Bitterman concludes the book with descriptions and tasting notes for hundreds of non-potable bitters and more than 50 amari.

Bitterman’s Field Guide to Bitters and Amari is a very well-written and beautifully photographed book. While the book was clearly written with the home cocktail enthusiast in mind, it is also an excellent resource for professional distillers interested in creating their own concoctions. The recipes included map out the building blocks for creating well-structured and creative bitters. The tasting notes in chapters five and six create a framework on how to think about and describe these products. Distillers interested in entering this segment of the market can ask themselves: How bitter, sweet, or aromatic should this bitter or amari be and what flavors or colors should stand out? A small number of distilleries have successfully started making bitters to complement their spirits portfolio. Producing bitters and amari offers inspiration to be creative and can jump-start collaborations with bartenders and chefs, who often have great senses for how flavors commingle. —Eric Zandona 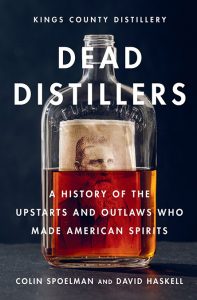 Dead Distillers: A History of the Upstarts and Outlaws Who Made American Spirits

An employee of Brooklyn’s Green-Wood Cemetery inspired Spoelman and Haskell to write their newest book after organizing a tour of the graves of distillers interred there. As they looked at cemeteries around the country, they realized that the buried distillers all had intriguing stories to tell that were uniquely American. The book retells shortened biographies of 76 distillers who ranged the gamut from slaves and outlaws to successful businessmen and U.S. presidents. The stories are arranged by the distillers’ death dates, and are interspersed with newspaper clippings of distillery accidents that have lamentably taken the lives of workers, neighbors and rescue personnel for the past 400 years.

Dead Distillers is an excellent book that pays tribute to and humanizes those whose stories are included. For the average consumer, spirits named after dead distillers are seen as marketing depicting them as whiskey gods in an American pantheon. However, Dead Distillers succeeds at honoring real people who led fascinating and complicated lives with their biographies and two fantastic infographics. While most infographics try to simplify data to the point that it is immediately digestible in a single glance, the two included in the book are more akin to topographical maps that only reveal the depth of their content through close inspection. And finally, while Spoelman and Haskell wrote the book for anyone interested in distilling, it offers living distillers a memorial as real as any graveyard headstone that they can visit and remember both the successes and failures of those who came before them. —Eric Zandona